Omaha officials announced a $306 million streetcar line that will give visitors and residents a free form of transportation from the downtown convention district to a variety of entertainment options in midtown Omaha. The three-mile route will connect to 13 stops including: Omaha’s downtown convention center and arena; Charles Schwab Field Omaha, home to the NCAA Men’s College World Series; and entertainment districts including the Old Market, Blackstone District, and Midtown Crossing, all which offer locally owned restaurants, bars, retail shops and venues.

The announcement comes as insurance icon Mutual of Omaha unveils plans to build a 40 plus-story skyscraper in downtown Omaha to anchor the city’s new $300 million Riverfront Park. The stunning glass tower will provide a picturesque, skyline-changing addition to the city’s landscape. The Fortune 500 company, headquartered in Omaha, currently employs 4,000 workers. Both the skyscraper and streetcar are expected to be completed in 2026.

“Beginning this year, and for the next five years, Omaha will start to transform into a whole new city,” said Visit Omaha Executive Director Deborah Ward. “The development happening here is unprecedented. New entertainment options and increased accessibility will add even more to the city’s appeal as a visitor destination.”

In addition to the new skyscraper and streetcar, a $500 million dollar expansion and modernization project is planned for Omaha’s airport (OMA). The $101 million Kiewit Luminarium, designed to inspire creativity in science, technology, engineering and math (STEM), is currently under construction along the riverfront and should be open in 2023. Also under construction, Steelhouse Omaha is a new $109 million downtown live music venue slated to open next year. The first phase of the city’s new 90-acre, $300 million Riverfront Park opens this summer and will include a performance pavilion, interactive water features, a sculpture garden and a state-of-art playground.

Visit Omaha, also known as the Omaha Convention & Visitors Bureau, is the official tourism authority for the City of Omaha and Douglas County. 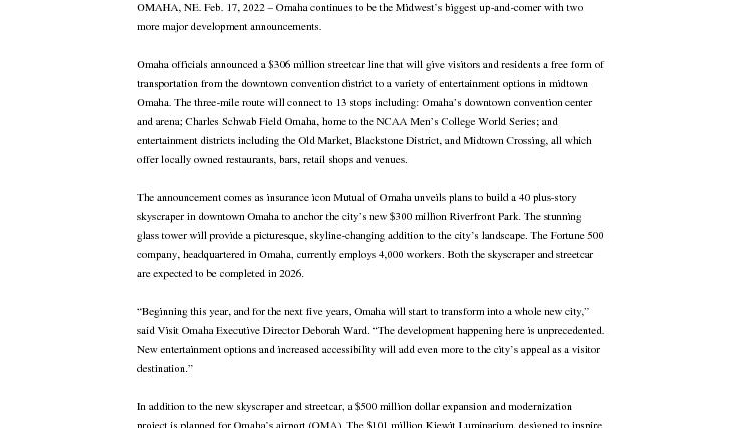 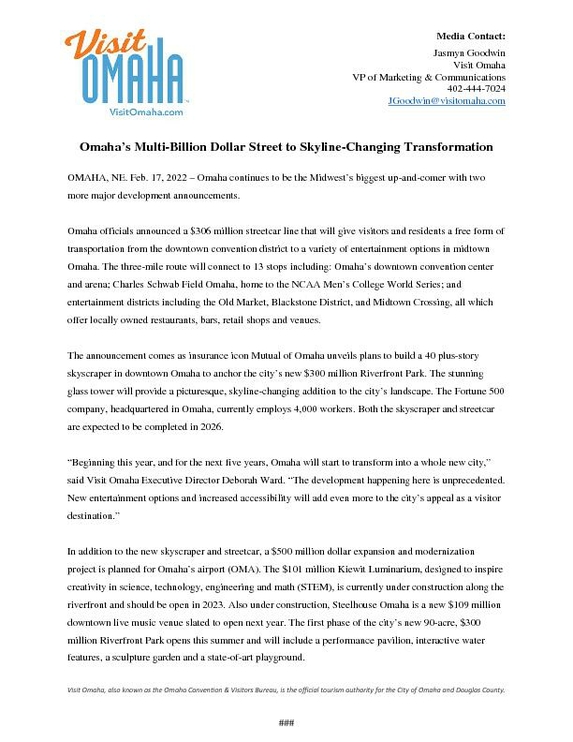